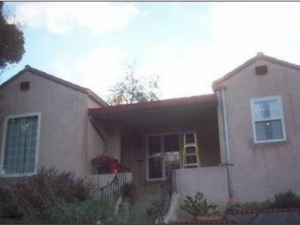 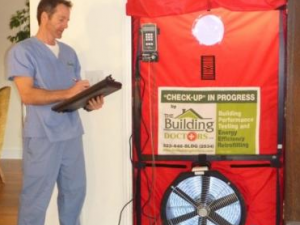 Greg Stevens was experiencing many issues with his 1700 sq. ft. home in Los Angeles, CA. The Spanish-style building was built in 1932 and was extremely drafty. He was unhappy with the extreme swings in temperature and keeping the home cool or warm was a constant battle. The dust in the house was also a health concern.

After doing an energy evaluation of the home, Dan Thompsen, owner of Building Doctors, a BPI GoldStar Contractor, was able to identify some of the major issues causing the uncomfortable temperatures and dust. The wall furnace needed to be updated, there was absolutely no wall insulation, and the house was very leaky. There was also an out-of-date and inefficient water heater.

Dan and his team of professionals took a whole-house approach to the project and recommended changes that would make the entire home function more efficiently. They air sealed many areas of the home that were causing the air to leak in and out and added attic insulation and wall insulation where there was none before. They combined the home's hydronic heating and air conditioning system and installed a Rinai tankless water heater.

The comprehensive work that was done made a substantial difference in the comfort of the home. Results from testing done before and after the work showed a 24% reduction in air leakage. The indoor temperature was much more consistent and less reactive to the outdoor temperatures. The energy bills were reduced and the new heating and cooling systems were supported by the air sealing and newly installed insulation, which made the systems more effective. The indoor air quality was also improved and dust was much less of a problem, creating a healthier home for the homeowner.

"Thanks very much, Building Doctors for the outstanding work.

Let me start off by saying that I decided to wait a year before writing this review just to see how the improvements to our house paid off and to see if any quality issues came up with their work. The year has passed and the work they did is worth every dime! We hired them to do an energy audit on a 1932 house we had just bought.

It's our first home, so we bought a fixer-upper, which meant we had no heating and cooling. The place was hot in the summer and cold in the winter... no fun. The audit price felt expensive at first, but that's before I understood what we were getting. The information about energy efficiency and the level of detail they provided in suggestions for improvement was really quite awesome. The services they priced out for us were nicely tailored to our house and there were no hard sales pitches. Instead, they simply just armed us with information and we did the choosing. They made it clear that no project was too small, and helped us prioritize. In the end, we enrolled in a city pilot program for heating your home using a tankless water heater, had them install AC, and made major upgrades to our energy efficiency, including air sealing and adding insulation.

I can't express enough how much those last two improvements (sealing and insulation) made a difference. Building Doctors told us it would, and they weren't kidding. Because we wanted to claim state and city energy efficiency credits, there was quite a bit of paperwork, but they handled nearly everything. For any forms or surveys that we needed to complete for the pilot project, we were given a heads-up well in advance. And the end result was a big payoff in savings.

The crew are friendly, hard-working, and dedicated. They are a small business with a focus on doing the right thing. As with all projects, there is room for error. And their one mistake was a worker who missed a large section when insulating one of our walls. But on the exit energy audit, they caught the mistake themselves and came the next day to fix it. I wasn't thrilled about the mistake, but extremely pleased with the response. They could easily have let this slip by... and they didn't. I'm pretty particular about knowing all the details, and they answered every question with a tremendous level of knowledge. If you have an interest in energy efficiency, and knowing the nuts and bolts, these are your guys. Their owner, Dan, is a pro and a leader in the field. And the best part, he's involved in the project through most every step. On the last day of work, Dan came out and helped his crew finish with some insulation work. Yep, he was up on the ladder himself getting it done.

Last thing: If you decide to try a big box store to install heating or AC, you'll really miss out on a first class experience with this team. We called Sears and had them come to do an estimate before hiring Building Doctors, and it was clear the only aim of that sales team was to sell us the largest heating and cooling system they could, while telling us that everything they sold was "efficient." In the end, we ended up with an AC and heating system that was half the size (and cost) of what Sears would have sold us, and it works perfectly.

Overall, we couldn't be happier with the work."

Meet the Leets. See how well their home performs.